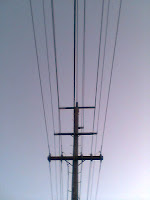 I love conspiracy theories.  Not that I actually believe them, but I find them a lot of fun. And my favourite one would have to be the whole 'Paul is Dead' one.  You know, Paul McCartney supposedly died in a car crash on 9th November, 1966 and was replaced by Williams Campbell (Billy Shear - Billy's Here - geddit?) so that thousands of fans worldwide wouldn't kill themselves.  Of course, the remaining three (as well as all those others who would have to know about it) kept quiet about it forever, and even went so far as filling their albums and songs with clues for us.

It makes no sense at all, but it sure is fun.

I watched a DVD yesterday, in which a tape purporting to be George Harrison (but actually sounded like a talentless American actor doing an impression of what he thought a Liverpudlian should sound like) confesses to his involvement in the cover-up. It even went so far as to claim the only witness to the accident was a woman named Rita who was bought off.  Later, she survived an assassination attempt by MI5, but lost her leg. She blackmailed McCartney into marrying her or she was going to reveal the whole story.  Somehow the producers didn't figure out that Heather Mills wasn't even born in 1966 when the accident supposedly took place.

Oh yeah, ignore that one at all costs - but do check out the books and webpages surrounding the story. And if you're interested, check out The Beatle zombie retelling, Paul is Undead.

Festive Fear 2 will soon be released by Tasmaniac Publications, and I have my story, Ghost of the Heart, included.  What you don't know is that my story includes a good dose of the whole Paul is Dead theory. And boy, was that fun to write.  Keep an eye out for it, and find a copy if you can.  I believe it's already sold out.

Just finished rewriting another story of mine. My mentor, Paul Haines, (under the Australian Horror Writers Association) made a number of recommendations which I spent a few weeks considering. A few ideas finally fermented and ended up on paper.  I've just sent the rewrite back, so I'll have to wait and see what Guru Paul thinks of it.

And apart from that? Life goes on and work is busy.  My friend and colleague even announced my forthcoming publication at work last week. I plan to kill him for that at some point.

Maybe I'll replace him with a double named William Campbell.
Posted by Steve Cameron at 6:17 AM