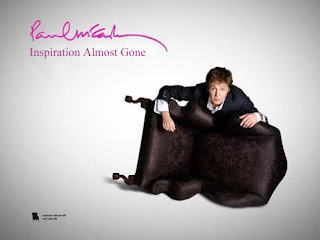 I recently saw Neil Young in concert, and during the show it occurred to me that he was still relevant and vital. Even his recent albums have been strong. (OK, maybe not Living With War, but at least that had a purpose!)

You see, I had this theory that it was hard to be an inspiring (and inspired) artist when you’re a sixty-something multi-millionaire. Can you be an ‘angry young lion’ when you sleep on 1000 count Egyptian cotton sheets, with a dozen expensive cars parked in the garage on your ranch?

Over the past few years, the dinosaurs of rock (Dylan, McCartney and so on) have received great reviews for new albums. On its release, I listened to the McCartney album, Memory Almost Full, and was thrilled I hadn’t actually purchased it. And yet people raved about it.

What is it I am missing?

I'm a Beatle (and a Paul) completist (Yes, I even have mono mixes of Ram) but I can't understand the high praise for this piece of crap.

I found it to be sedate, pedestrian, uninspired and quite dull - the sort of throw-aways that show Paul is sorely lacking a foil, someone who'll look him in the eye and tell him that a song is substandard.

Would an unknown artist have even landed a deal with this disc as a demo? I'd be surprised.

The best album since...? Well, to be honest that's not hard -- Paul's releases over the past decade or two have been scattershot at best. And although Chaos and Creation had moments, it wasn't as superb as people claimed.

Paul stated somewhere that this album was mostly written (and even recorded) before the previous album, which means it's not a response to the divorce.

What a shame! Maybe a bit of anger and angst is what he needs.....

Maybe people are so desperate for new Beatle product that any glimmer of hope is immediately seized upon and put on a pedestal. Thank goodness Neil is around to carry the torch.
Posted by Steve Cameron at 4:18 AM

Hi Stevo ... Visiting your blog for the first time (very nice, mate!). Figured you'd have some mention on here of the Fabs as well as XTC! Way to go, dude ... It all looks rather fetching, I should say. ;-) Much continued success to you in your writing and teaching and learning and living. My best, as always, to "the better half." (We all know who she is, now don't we?) Laterness, my man ...........