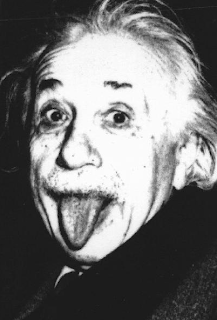 Einstein knew what he was talking about. Not many of the rest of us do, though.

On the one hand this genius gave us a new insight into the workings of the quantum world, on the other he messed with our minds to the extent that we now have to try and understand superstring theory. The Elegant Universe, by Brian Greene, is a well written, fascinating approach to complex (some might say 'heavy') science. And, as one of Enid Blyton's characters may have said, it's a "jolly good read".

We all know the feeling. You plan a vacation, and the anticipation and journey feel like it takes forever, while the actual time there and the journey home pass quickly. But some things do take forever. Or at least thirty years.

I feel like a character from Lord of the Rings at the end of a quest. Three times in the past week thirty year 'waits' have come to an end.

In 1978 or so, at high school, (yes, I am that old), a teacher read us a short story that I loved at the time and have always recalled. As a 15 year old I never bothered to get the author or the title. I've spent some of the last thirty years trying to obtain these details, with a more serious attempt at detective work over the past six months. It's actually very difficult to locate this kind of information with only vague memories of what the story us about, but persistence pays off and I'd like to thank the editor who responded to my email immediately. He'd recognised the synopsis from his own schooldays. It's great to finally have a copy of this story.

Around the same time in high school I decided I wanted to fly remote control aircraft. I looked into it, but it seemed very expensive. I went to a meeting or two but realised that the whole thing was way out of a student's price range. I never really looked into it again, believing that it was still an expensive hobby.

But last month, after a chance meeting with a couple of flyboys while walking the wonderdog, I learned that as a hobby it was much more affordable these days. And so my lovely wife bought me a trainer. My friend bought one too and yesterday we had our first successful crashes.

But before gravity proved its existence in spectacular fashion, they did fly around and respond to my controls and made half decent landings once or twice. I even looked like I was in control a couple of times.

And then to top the week off we bought tickets to see the newly reformed Angels. I had two favourite albums in those days, Screaming Targets by Jo Jo Zep and the Falcons, and Face to Face by The Angels. Both these albums (on vinyl) were played regularly during much of the time I was meant to be studying. Now on CD they are still often heard in my house.

But the Angels of the 80s and 90s never excited me as much as the Angels of the four big albums. Even though I still liked their later releases, Face to Face, No Exit, Darkroom and Night Attack had something, an edge, a rawness, that was missing from later incarnations of the band. Unfortunately I never saw them live at all.

Then Doc Neeson had his falling out with the other guys, ran off with Jim Hilburn and formed Red Phoenix, a second rate Angels wannabe. This evolved into Doc Neeson's Angels which released the spectacular, but relatively unknown, Acoustic Sessions album. Meanwhile the rest of the original boys reunited as The Angels, and then The Angels Band due to legal threats by Doc.

I had the complete joy of seeing them live last year. It was a truly sublime moment that I had waited for so long and although they were brilliant they lacked the Doc's menacing vocals, the vocals that suggest he is on the verge of madness.

But they've resolved something (although the Doc claims its not permanent) and are touring shortly - the original five. Just when I thought I was never going to see their faces again, I have tickets for next month.

Do good things come to those who wait? It's taken thirty years, and it is interesting the three events converged on this week, my birthday week.